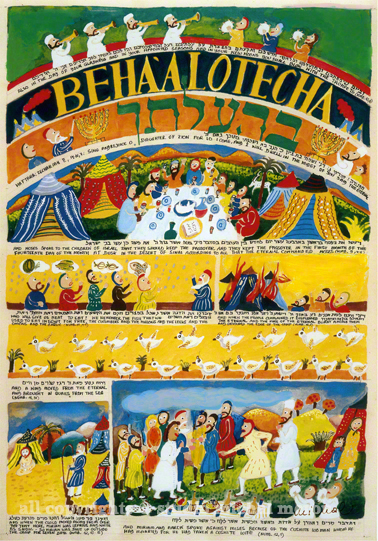 Next read in the Diaspora on 06 June 2015. Parashat Beha’alotcha is the 36th weekly Torah portion in the annual Jewish cycle of Torah reading.

After the dedication of the Sanctuary — the portable Temple and repository of the Torah — the Children of Israel were almost ready to start the journey to the Land of Israel. The purpose was to fulfill the mission of Abraham, the founding father: to take the Ark of the Covenant up to Jerusalem so that the light of the Torah would shine from Mount Moriah to the entire world.

The opening sections of BEHA’ALOSCHA set forth some final details relating to the Sanctuary and its services (the lighting of the Menorah, the inauguration of the Levites and their service, the law of the Second Pesach). The Torah then relates the miraculous Divine providence visible in the encampment and journeyings of the Children of Israel in the wilderness. The sections dealing with the Sanctuary conclude with the command to Moses to make trumpets, after which the Torah relates the Children of Israel’s momentous first journey from Sinai towards the Promised Land.

“The Second Pesach” has two senses in connection with our parshah. In the first sense, so far there had only been one Pesach: the night of the Exodus from Egypt. The celebration of the one-time Second Pesach, a year later, free in the Wilderness, recipients of the Torah, with the Sanctuary newly erected, was itself an event. It showed that the Exodus, as the foundational event of the People, was henceforth to be institutionalized as an annual experience with the slaughter of the lamb on Passover.

The sacrifice could only be offered by those in a state of ritual purity. So central to the attachment of the Individual to the Nation is this annual sacrifice (failure to bring the sacrifice makes one liable to excision) that some provision had to be made for those who were unable to bring it in its proper time on 14 Nissan. This might be because they were far away and unable to reach thTemple, or because of defilement for any one of a number of naturally recurrent reasons (contact with the dead, menstrual impurity, etc.) Accordingly they were given a “second chance” on the annual PESACH SHENI, Second Pesach (in the second sense of the term!) institutionalized now in Torah law.

The Torah narrates in our Parshah how this vital national law, integral to the annual functioning of the Temple as the central focus of the Children of Israel, came to be revealed because when G-d commanded them in the wilderness to observe the one-time “Second Pesach” on 14 Nissan, one year after the Exodus, a number of people in the camp were ritually impure.

Knowing there was no way they could participate in the celebration of this awesome one-time event — institutionalizing for all time the annual celebration of the anniversary of the Exodus with the eating of the Paschal Lamb, they felt they had LOST OUT. They felt denied this central act of communion with fellows because of extraneous natural reasons: they had to attend to the dead.

“Why should we be worse off, not to be able to offer the sacrifice of HaShem in its appointed time among the Children of Israel” (Numbers 9:7). (The offering of the Paschal Lamb in the Sanctuary Temple was accompanied by the full Levitical choir and orchestra singing the Hallel, an awesome experience.)

“Why should we be worse off?” There was no way that they could offer the Sacrifice but they longed to be able to. It was their longing that elicited the commandment of Pesach Sheni, the annual “Second Pesach” that gave a SECOND CHANCE to those who lost out the first time — a tremendous act of love and compassion.

Longing and yearning elicits love and compassion. It is our longing for the Second Pesach, the Pesach of GEULAH, when we too, now impure through contact with the dead etc., will have a SECOND CHANCE and won’t have to feel we lost out because we didn’t experience the Pesach in Jerusalem.