People who knew R’ Yitzchok Breiter (1886-1943?)
described his magnetic effect on people. He had a magical
power of speech, and his words went directly into the hearts of
all who came in contact with him.

Yet despite his penetrating wisdom, he conducted himself with
the utmost simplicity in his studies and devotions. He spent
much time in hitbodedut (secluded meditation and prayer),
gathering a circle around him who never let a day go by
without this practice. With all R’ Yitzchok’s breadth of Torah
learning, his profound knowledge of Breslov literature, and his
capacity to arouse and fire his followers, he never presented
himself as anything other than their friend and equal, and they
knew him simply as Yitzchok. 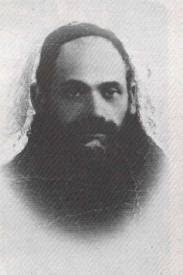 The intensity of R’ Yitzchok’s faith and trust in God was summed up by R’ Avraham b’Reb Nachman (1849-1918), leader of the Breslover Chassidim in Uman: “R’ Yitzchok walks in faith like someone walking through a most amazing garden.”It once happened that R’ Yitzchok was arrested by the Polish authorities on trumped-up charges, together with a neighbor.

In the anti-Semitic climate in Poland, such arrests were not
infrequent. As they were being taken into custody, their hands
were chained. R’ Yitzchok saw that his neighbor was depressed.
“Why are you sad?” he asked. “Imagine if they bedecked you
with chains of gold. Would that be a reason to get depressed?”
R’ Yitzchok was sentenced to five years in prison. When he
heard the verdict, he rose to his feet and joyously made the
blessing over bad tidings: “Blessed are You … the True
Judge.” In the prison, the authorities wanted to shave off all
the prisoners’ beards. R’ Yitzchok prayed fervently to God
not to let them touch his beard. Just as the prison barber was
finishing the prisoner before R’ Yitzchok, the razor broke and
he was unable to continue. Within a few days, the Russians
occupied that part of Poland and released all the prisoners.
In World War II, when the Nazi persecutors overran Poland,
R’ Yitzchok was one of the leading figures in the Warsaw
Ghetto. In the early 1940s he was deported to the Treblinka
concentration camp, and there he lost his life in the gas
chamber in sanctification of the Name of God.
From the Introduction to “Seven Pillars of Faith”