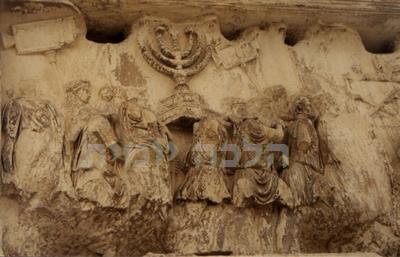 The Perushim and Rabbi Yehoshua
The Gemara (Baba Batra 60a) states that after the destruction of the Bet Hamikdash, the Perushim (a group of G-d-fearing Jews) enacted that meat and wine should no longer be consumed claiming that since sacrificial meat was no longer offered on the altar and wine was no longer be libated on it, how can our table be full while Hashem’s remains lacking?

Would these Perushim want to institute this stringency only among themselves, that would have been just fine. The problem was that they wanted to impose this on the entirety of the Jewish nation and they frowned upon those who continued to eat meat and drink wine.

The Sages did not wish to impose such difficult decrees upon the Jewish nation as they understood that decrees that cannot be undertaken by a majority of the population should not be enacted. Rabbi Yehoshua therefore decided to engage these Perushim. He asked them, “Why do you not eat meat and drink wine?” The replied, “Is it proper for the house of Hashem to lay desolate without the sacrifices or libation offerings while we eat meat and drink wine?” Rabbi Yehoshua retorted, “If so, why do you eat fruit? Since the Bikkurim (first fruits) are no longer brought to the Bet Hamikdash any longer, it is inappropriate for you to be eating fruits either!” They replied, “How correct you are! We shall abstain from the fruits of the Seven Species (from which Bikkurim were brought) and consume only other types of fruits.”

Rabbi Yehoshua told them, “Why do you eat bread when there are no longer any meal-offerings being brought upon the altar?! Similarly, why do you drink water when the water libation is no longer performed on the altar during the Sukkot holiday?!” The Perushim were unable to reply to his claim. Rabbi Yehoshua meant to teach them that although we are obligated to mourn and participate in the suffering of the Shechina, nevertheless, mourning too much is also not recommended because these are decrees that the Jewish nation simply cannot withstand. Furthermore, if one does not eat meat, one will become weak and unable to engage in Torah study with ample strength. Thus, one should not engage in such intense mourning throughout the year; rather, one should observe the few mourning customs instituted by our Sages in commemoration of the destruction of the Bet Hamikdash (see Gemara ibid).

Based on the above, although we customarily eat meat and drink wine throughout the year, nevertheless, during these days, the Jewish nation has accepted several mourning customs upon themselves, as we shall explain. Although most of these mourning customs are not rooted in the words of our Sages and were merely adopted by the Jewish nation themselves, one must nonetheless observe these customs carefully as they have been accepted as actual laws.

The Levels of Mourning during this Period and the Laws of the Week during which Tisha Be’av Falls Out This Year
In the following Halachot we shall, G-d-willing, discuss the laws of the “Three Weeks” (based on what we have written in previous years along with some new additions). There are various degrees of mourning observed during this period: From the Seventeenth of Tammuz until Rosh Chodesh Av, few mourning customs are observed. From the day of Rosh Chodesh Av, some more mourning customs are added. During the week during which Tisha Be’av falls out, even more mourning customs are observed.

The source for this custom can be found in the Sefer Chassidim who writes that they would not eat a new fruit during the “Three Weeks,” for how can one recite the blessing of “Who has given us life, sustained us, and allowed us to reach this time,” during such a tragic period? Maran Ha’Shulchan Aruch likewise writes that it is preferable to abstain from reciting the “Shehecheyanu” blessing on a new fruit or garment during the “Three Weeks.” Rabbeinu Ha’Ari z”l rules likewise, as do the consensus of the Acharonim. (Chazon Ovadia-Arba Ta’aniyot, page 129)

Maran Rabbeinu Ovadia Yosef zt”l  writes that it is permissible to purchase new clothing during this period until Rosh Chodesh Av; however, the clothing should not be worn until after Tisha Be’av.